Andri Tambunan spent a decade covering conflict abroad, but amid the pandemic, he has turned to portraits to highlight a socioeconomic conflict in his hometown

SACRAMENTO, Calif. — For years, stories of struggle and resilience have been captured through a Sacramento photographer’s camera lens.

Tambunan has spent the last decade covering armed conflict aboard, but amid a pandemic, he’s turned to portraits to illustrate the socioeconomic conflict in his hometown of Sacramento.

Tambunan realizes the pandemic has taken an outsized toll on minority and women-owned businesses. The smallest of the small businesses are overlooked and left in the shadows. Thus, his portrait and interview series “In the shadows,” was born.

“They tend to be concentrated in industries most immediately impacted by the pandemic, working in industries like foodservice, personal services, and retail,” Tambunan said. “And because of racism in the system, they face underlying issues that make it harder to run a profitable business like having strong relationships with banks.”

“I’m a one-woman shop, so I couldn’t qualify. I don’t have employees,” she said. “So, I really relied on family members to help out with the shop when they can, and I’ve gone to appointments only.”

“I wrote my heart out to them,” said Owens, owner of South Sacramento’s  Center Boxing Gym.

RELATED: Here’s how to get the COVID-19 vaccine in Northern California

According to data from the Small Business Administration, more than 26,000 businesses in the four-county Sacramento region received approval for loans through PPP. According to beneficiaries who identified their race in authorized PPP loans, more than 1,000 businesses were white-owned, 11 were American Indian of Alaskan Native-owned, 26 were Black-owned, 163 were Hispanic-owned, and 356 were Asian American owned. Additionally, businesses based in the suburbs received the largest slice of federal assistance.

In March 2020, the city issued $1 million in loans for small local businesses. Only 5% went to historically underserved neighborhoods of color, like Oak Park, South Sac, or Del Paso Heights. While half of the disbursements went to businesses in the Downtown and Midtown core. In a second round of disbursements, nearly 1,400 businesses received funding. 30% were located in central Sacramento.

Owens says he was lucky to receive a loan from the city after getting denied for PPP loans.

“Little people fall between the cracks,” he said.

RELATED: Coronavirus recovery rates: How many people are surviving in the Sacramento region

Still, restrictions kept Coach Owen’s champion-making gym mostly closed with bills piling. Negotiations with his landlord, and help from his wife, also kept the gym afloat, but after 11 months his back was against the ropes. He decided to risk a partial re-opening for struggling kids, who need the positive outlet he says.

“I’m still here for these kids, you know. And god willing, we’re going to get through this,” Owens said.

Tambunan says the loss of these businesses would create a void in already under-served communities.

When Payenda reflects on the past year she says she thinks of loyal customers who continued to support her. She said they bought dresses for photoshoots in place of special occasions.

“They’re not just buying a dress, they’re celebrating an important day in their lives, and I’m going to be there for them,” Payenda said. “I try not to think how bad it is, I try to think of how thankful I am right now!”

Tambunan, himself out of steady work, says the project has motivated him to keep fighting for his livelihood and for his community. As a recipient of Sacramento’s individual reimbursement grant, he chose to put the money back into telling stories of his community. He says he hopes the project will move people to action and think of ways to help small businesses owned by women and minorities.

A portion of Tambunan’ s portrait and interview series, “In the shadows”, will be published in Sac Town magazine.

WATCH NEXT: ‘I am hanging on by my fingers’ | Small business owners struggle to survive amid stay-at-home order

With outdoor dining no longer an option, many restaurants still struggling to survive to say that to-go orders are just not enough to make ends meet. 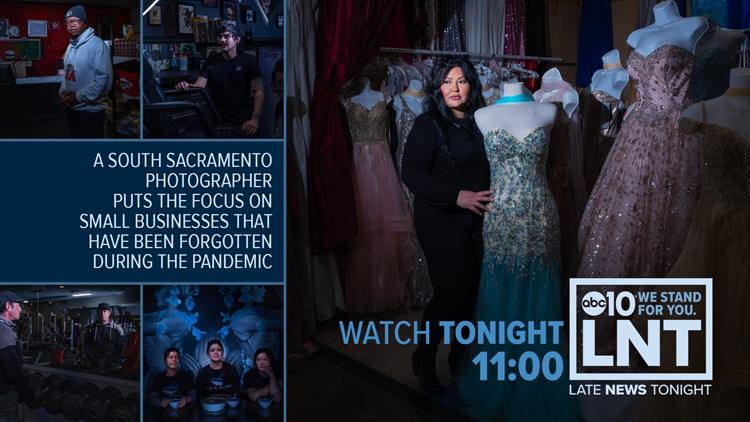